Why Singapore, the world’s ‘most crypto-friendly economy,’ is shutting down Bitcoin ATMs

On Tuesday, Singapore’s leading operators of crypto ATMs were forced to shut down their cash machines, after the Monetary Authority of Singapore (MAS) outlawed the cash-to-crypto terminals as part of a wider crackdown on advertising cryptocurrency to the public.

Daenerys & Co., which operates five crypto ATMs across the city, said it was “surprised” by the MAS guidelines but ceased its ATM services late on Tuesday. Rival Deodi switched off its ATM network, too, and quickly dispatched staff to remove its ATM machines from malls across Singapore.

The clampdown in Singapore comes quick on the heels of similar advertising restrictions in Spain and the U.K. Spain mandated on Monday that crypto firms must submit ad campaigns for regulatory approval 10 days in advance, while the U.K. launched a review of cryptocurrency advertising practices, promising to crack down on “products with misleading claims.”

But Singapore’s souring on crypto is a bit more surprising. In December, fintech startup Coincub ranked Singapore as the world’s most crypto-friendly economy, owing to the city’s “positive legislative environment, and high rate of cryptocurrency adoption.” But the city state’s legislative environment looks a little less positive now.

On Monday, the Monetary Authority of Singapore issued a new set of guidelines on the “provision of digital payment token [DPT] services to the public” that decreed crypto operators “should not promote their DPT services to the general public.”

The MAS called out ATMs—where the public can convert cash into Bitcoin, Ether, and other digital currencies—specifically. The monetary authority warned the convenience offered by cash-to-crypto terminals could lead the public to buy Bitcoin and other virtual currencies “on impulse, without considering the risks.”

And it is a risk.

The price of Bitcoin, the flagship currency of the crypto world, has nose-dived this year, plummeting from a peak of around $67,000 last November to trading at roughly $42,000 on Wednesday. Despite heady gains throughout 2020 and 2021, the volatile cryptocurrency has performed worse over a four-year period than the Nasdaq index.

MAS said it has “consistently warned the public that the trading of digital payment tokens…is highly risky and not suitable for the general public” and reiterated that “the public should not be encouraged to engage in the trading of DPTs.” 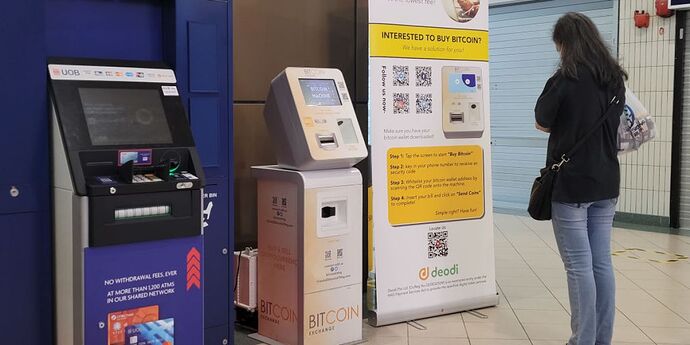