Which Cities Have the Most Bitcoin ATMs?

Bitcoin is fast becoming an accepted form of currency. Miami is incorporating the cryptocurrency into its monetary systems while others are thinking about making the move. A landlord in Los Angeles now accepts rent payments made in bitcoin. Though it is gaining traction, the cryptocurrency will need more public accessibility before its usage can grow further. According to Coin ATM Radar, there are more than 18,000 Bitcoin ATMs operating across the nation. However, the majority of the ATMs are mostly available in the country’s major metropolitan areas.

When evaluating cities based on the number of existing Bitcoin ATMs, Los Angeles, Calif., ranked the highest with 1,065 available machines. Los Angeles has significantly more Bitcoin ATMs than the other nine cities that filled out the top 10; Chicago, the second-ranked city, has 400 fewer than L.A. Not surprising, all cities that made the top 10 by the number of ATMs are associated with large metropolitan areas with growing tech sectors. 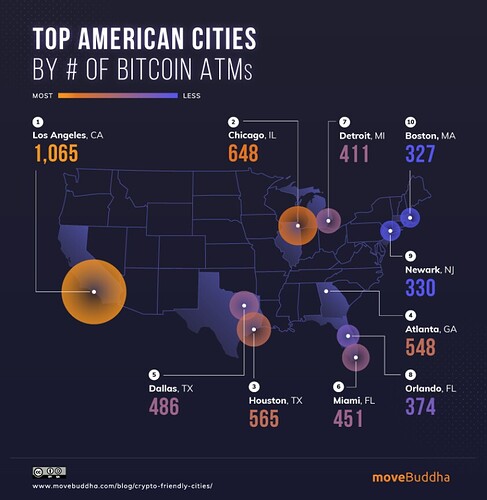 However, not every metropolitan area made the list. New York City, for example, was not ranked in the top 10, despite being the largest city in the U.S. by population. Los Angeles was the only California city, leaving out the Bay Area cities that surround the major tech hub of Silicon Valley. 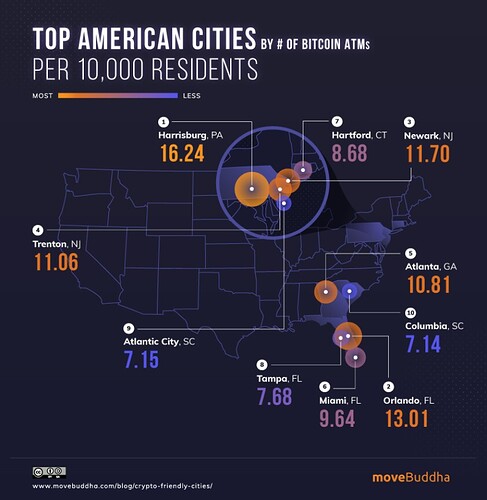 Bitcoin is the most expensive cryptocurrency, worth 14 times more than the next cyber currency, which could impact where demand for Bitcoin ATMs will be found. To account for this economic relationship between the cryptocurrency and a city, moveBuddha ranked cities a third time to consider the gross domestic product. Harrisburg moves down to the fifth best city with only 20.05 Bitcoin ATMs per $10 billion GDP. Orlando, yet again, remains in the top 10 and comes in second only to Raleigh, N.C. 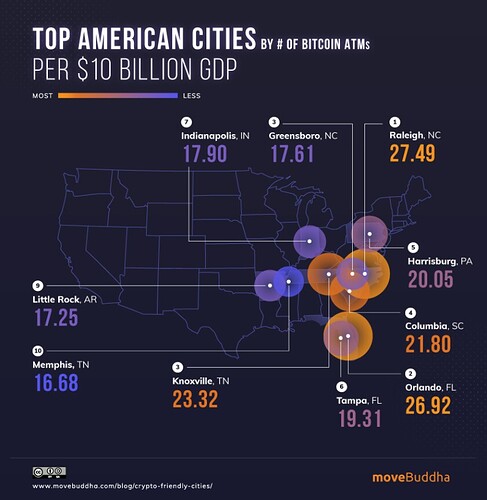 Despite being the top-ranked city per GDP, Raleigh had only the fourth largest GDP ($84 billion) of the list, trailing behind second-ranked Orlando ($139 billion) and sixth- and seventh-best Tampa and Indianapolis ($159 billion and $141 billion, respectively).

One reason for some of the smaller cities’ success in this category could be that bitcoin mining is extremely expensive, so areas that have cheaper land and utility prices are usually able to reduce mining costs.

Orlando is the only city to appear on all three lists which suggests that the mid-sized city may be the best overall for Bitcoin ATM adoption despite it never being the top rank for any category.

Which Cities Have the Most Bitcoin ATMs?

As Bitcoin gains momentum, some cities, including Los Angeles, Harrisburg and Raleigh, are allowing Bitcoin ATMs. The trend has both advantages and downsides.