The First Bitcoin ATM In The US Is Opening In Austin, Texas

USA! USA! We are now officially almost as good as Canada! Why? Because the folks at Robocoin are officially turning on the first U.S.-based Bitcoin ATM at the HandleBar in Austin, Texas.

The ATM, placed prominently in the Austin tavern, will be much like any other ATM you’ve used. You walk up, put in some money, and pull out bitcoin. Bitcoin owners will be able to sell through the machine and you will receive a receipt and an amount of BTC will be credited to your virtual wallet. The company already has ATMs in Vancouver and has shipped them to Asia, where they were briefly outlawed.

The company will turn on their ATM on Thursday, February 20, at 2pm. This ATM is just the beginning.

“Robocoin will be EVERYWHERE! We’ve just arrived in Texas and have already shipped to Seattle, Washington and Alberta, Canada,” said founder Jordan Kelley.

“Austin’s Robocoin is going to a really cool location downtown at the HandleBar. We have a bunch more shipping to amazing locations in Canada. We’re also still moving forward with Hong Kong, but we underestimated how long the international hardware certification process would take.”

The enrollment system lets you sell bitcoin using a government ID as well as biometric data which “gives Robocoin Operators full customer visibility, trackability and reporting tools to support global compliance,” said Kelley. Obviously this may dissuade some of the more paranoid BTC sellers, but that might be the point.

“Now we’re building a global infrastructure of passionate and dedicated Robocoin operators who are all fully aligned with the mission of making bitcoin safe and accessible to the masses. Robocoin is completely removing bitcoin’s barriers to entry and helping bring bitcoin into the real world,” he said.

The machines are built using “bank-grade” hardware and network security. The computer is inside a safe along with the associated cash and the servers aren’t publicly accessible from the Internet.

Getting a Robocoin installed in your business takes a little doing, though. Kelley said that owners need an official Money Transmitter License (MTL) or to register as a Money Service Business (MSB). But Kelley sees the Robocoin’s audience, 18-40 year-old early adopters, as an ideal customer for a forward-thinking coffeehouse or bodega.

Kelly is looking forward to growth and isn’t worried too much about the government.

“We’re optimistic that the government will see us as allies. Look, bitcoin is here to stay, just like the internet. We think governments will look to regulate this emerging economy and will identify and support the businesses that are prepared to play ball,” said Kelley. 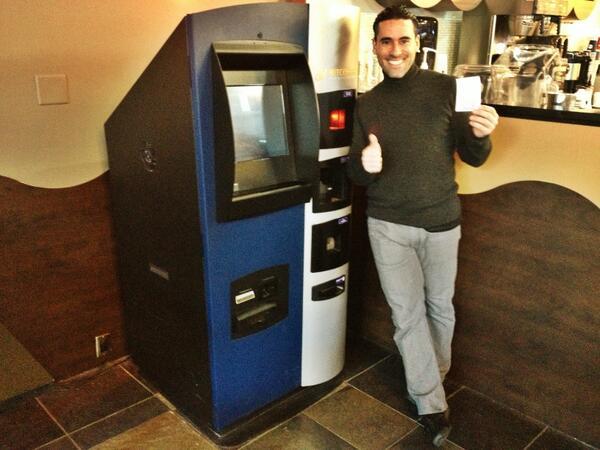 The First Bitcoin ATM In The US Is Opening In Austin, Texas – TechCrunch

USA! USA! We are now officially almost as good as Canada! Why? Because the folks at Robocoin are officially turning on the first US-based Bitcoin ATM at the HandleBar in Austin, Texas where you can mosey on up to the machine, slip in some dollars,...