Penticton has a new Bitcoin ATM, giving residents more physical access to the global monetary system and original cryptocurrency that has exploded in value since its inception in 2009.

The new Bitcoin ATM has been installed at Rocky Store (404-430 Haven Hill Rd.) by HoneyBadger Inc., a company that has installed over 150 Bitcoin ATMs across Canada since 2016.

“We believe in making Bitcoin accessible to everyone,” said HoneyBadger general manager Mike Kitt. “As Bitcoin becomes more mainstream, we want to ensure that people in small towns and local communities have access to this system and are able to participate in it.

“Since 2016, the team at HoneyBadger has been working their tails off to make Bitcoin more accessible for all Canadians, no matter the colour of their collar or the size of their city.”

HoneyBadger allows users to participate in an open and accessible financial system by using cash to buy and sell Bitcoin and make payments worldwide through peer-to-peer transactions.

After setting up a digital wallet – which can be done with as little as twenty dollars and a mobile phone – users can visit a local HoneyBadger kiosk to start buying and selling Bitcoin, and other popular cryptocurrencies like Litecoin and Ethereum within minutes.

Bitcoin allows users to store its value, make payments and exchange digital currency across the globe and it’s not as complicated as some might think.

“It’s a currency that works on the Internet. So, what it enables people to do is send value or Bitcoin to other people. It’s a lot like sending an email, it works anywhere on earth and it doesn’t matter where you are or what country you’re in,” said Kitt.

Bitcoin proponents say the cryptocurrency is establishing its position as the preferred method of currency and exchange in a world filled with debt and near zero interest rates.

“As public companies continue to add Bitcoin to their balance sheet, it is proving its potential to ultimately evolve into the main form of currency,” said Kitt.

Bitcoin’s value has skyrocketed since it first began being traded in 2010 when the price was less than 10 cents per coin. As of Tuesday, July 6 at time of publication one Bitcoin is worth more than $42,000 CAD.

The world’s most popular and notoriously volatile cryptocurrency made massive gains over the past calendar year.

Bitcoin then quickly dropped back down to prices around its current value around $40,000 CAD at the end of May where it has hovered around since. 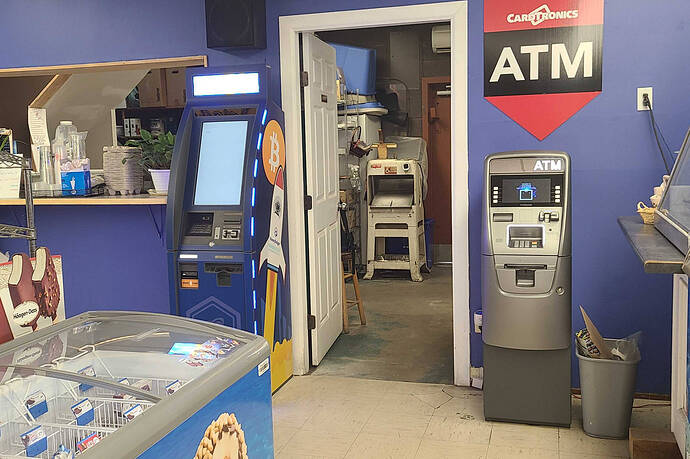 The kiosk, in a convience store, will allow users to use cash to buy, trade and sell crypto