New two-way kiosk installed at the Valleycliffe General Store; there was already a one-way cryptocurrency machine in downtown Squamish at Baltech Electronics.
about 14 hours ago By: The Chief staff

“We believe in making bitcoin accessible to everyone,” said general manager Mike Kitt in the news release from HoneyBadger on Oct. 5.
“As bitcoin becomes more mainstream, we want to ensure that people in every town and local community have access and are able to participate in it.”

The Valleycliffe machine facilitates the buying and selling of cryptocurrency.

Cryptocurrency allows users to make payments and exchange digital currency instantaneously across the globe.
“It’s a currency that works on the internet, so it enables people to send value to other people. It’s a lot like sending an email, it works anywhere on earth and it doesn’t matter where you are or what country you’re in,” said Kitt in the release.

Established in 2016, HoneyBadger is Canada’s largest bitcoin ATM provider with more than 160 machines from coast to coast.

This isn’t the first cryptocurrency ATM in town; there is also one at Baltech Electronics on Second Avenue.

It a General Bytes one-way machine.

Baltech’s Philipe Balit told The Chief he will teach people about the currency in store.

“I like educating people about it because I think it is a technology that is really interesting but quite nerve-wracking because it is money and something we are not really familiar with,” he said, adding once pandemic restrictions are fully lifted, he hopes to offer courses on it. 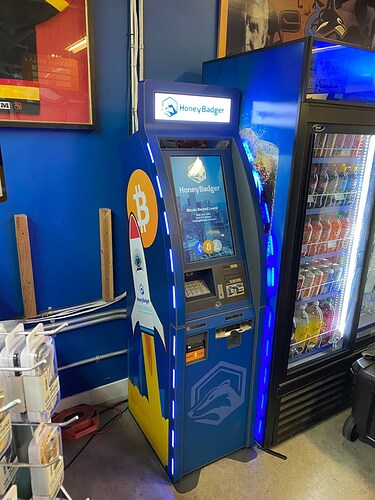 New two-way kiosk installed at the Valleycliffe General Store; there was already a one-way cryptocurrency machine in downtown Squamish at Baltech Electronics.