From ATMs to drug stores, you can now buy bitcoin almost anywhere

Mike Scanlan, a former information security analyst for Tufts Health Plan, fell in love with the digital currency bitcoin back in 2014. “Oh, my god, this is the future of finance,” he decided.

But then Scanlan tried to buy some.

“I had the worst time,” Scanlan recalled. “I spent like a week and a half trying to get bitcoin.” Which convinced him that he could make big money by offering a simpler way to buy the stuff.

Today, Scanlan is chief technology officer at Coinmover, a Lynn company that makes “bitcoin ATMs,” basically vending machines that sell the digital currency. Today there are just over 100 of his company’s machines in retail stores in Massachusetts, New Hampshire, Connecticut, and Washington state, each selling an average of about $40,000 in cryptocurrency each month. That’s less than the price of just one bitcoin, which has been bouncing between $44,000 and $52,000 in recent days. But Scanlan’s just getting started. He plans to have 1,250 machines in 18 states before the year is done.

There’s a nationwide surge in easier ways to buy cryptocurrencies, with bitcoin ATMs leading the way. According to the industry tracking site Coin ATM Radar, there were about 6,000 such machines in the US at this time last year, but over 26,000 today, with hundreds more installed every week.

And that only counts “pure” bitcoin ATMs, the ones that only sell cryptocurrency. In addition, thousands of traditional cash-vending ATMs have been modified to support crypto purchases as well. Then there’s Coinstar, which makes the coin-counting machines found in many US supermarkets. About 7,500 of these machines now sell bitcoin, and that number is expected to reach 10,000 by year’s end. Researchers at a different site, How Many Bitcoin ATMs, have added these hybrid machines to the mix, and estimate there are over 42,000 bitcoin vending machines in the US today.

NCR is one of the world’s leading makers of ATMs and point-of-sale devices. The LibertyX acquisition doesn’t just mean thousands more crypto-capable ATMs. It could also mean that thousands of retail stores could sell crypto just like candy bars.

It’s already happening. LibertyX has deals with retailers CVS, Rite Aid, and 7-Eleven to enable bitcoin purchases at selected stores. A customer uses a LibertyX smartphone app to punch in the amount he or she wants to buy, up to $500 per day. A barcode appears on the phone’s screen. A clerk scans the barcode and the customer hands over the cash. It’s instantly added to the customer’s bitcoin account, less a $4.95 transaction fee.

LibertyX claims this service is now available at over 20,000 retail stores. But that’s news to many of the retailers. Four CVS stores contacted by the Globe said they knew nothing about selling bitcoin.

LibertyX co-founder Chris Yim said “that seems to be a cashier awareness issue,” and added, “we have a lot of volume in Massachusetts.”

But at one of Coinmover’s ATMs, anyone can immediately purchase up to $2,500 in bitcoin per day, by simply providing a name, e-mail address, and phone number. Those wanting to buy larger amounts must provide more detailed information and wait several days for approval.

A Coinmover machine sells not only bitcoin, but other cryptocurrencies, such as Ether, Litecoin and Dogecoin. The user installs a crypto wallet app on their smartphone, which displays a QR code. Then they press the phone screen against a scanner built into the ATM, and insert the desired amount of money. The ATM reads the wallet code from the phone, and transfers the correct amount of digital currency into that wallet.

The process only takes about a minute, but it costs a lot. The transaction fee for a bitcoin ATM purchase ranges from $2.95 to $5.95. The buyer also pays a markup of 10 to 15 percent above the currency’s market rate. For instance, a recent $20 bitcoin purchase, after fees and markup, left the buyer with only $12.36 worth of the currency.

So who would use these machines? Anybody with a traditional bank account can use smartphone apps to buy cryptocurrencies with very low fees. For instance, it cost just 45 cents to buy $20 of bitcoin using a debit card and a program called Cash App. Other personal finance apps from companies like PayPal and Robinhood, also support low-cost crypto trading.

Francisco J. Alvarez-Evangelista, a banking analyst at Aite-Novarica Group, said that bitcoin ATMs might make sense for people in developing countries with limited access to banks. But the US “is kind of a hard market to tackle,” he said, “because there are so many easier ways to acquire and sell bitcoin.”

Still, the machines may appeal to US crypto investors with an obsessive concern about privacy, and to people looking for a fast and easy way to send money overseas. Once someone has bought bitcoin at an ATM, they can transfer the money instantly to a relative’s bitcoin address, anywhere in the world. Even with all the fees, “we are cheaper than Western Union in certain places,” Scanlan said.

Besides, cryptocurrency that’s bought through a bank cannot be spent until the transaction has completely cleared, and that can take several days. “With these machines you get your cryptocurrency immediately,” said Scanlan. “That’s why people are willing to pay more.”

According to a survey from the University of Chicago, 13 percent of US adults bought or sold cryptocurrency during the past year. That’s nearly 33 million people. How many more will buy in, when thousands of retail stores and ATMs become bitcoin trading posts? We’re about to find out. 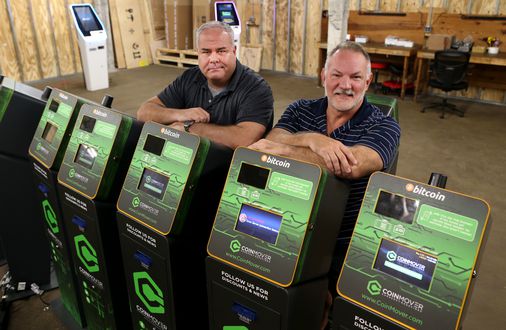 From ATMs to drug stores, you can now buy bitcoin almost anywhere - The...

There’s a nationwide surge in easier ways to buy cryptocurrencies, with bitcoin ATMs leading the way. An industry site says about 6,000 such machines existed in the US at this time last year, but over 26,000 today.