Down the aisle, past the pet food is Cape Breton's first bitcoin ATM | CBC News

A convenience store in Sydney, N.S., is leading Cape Breton into the digital-currency age with a new bitcoin ATM featured inside the store.

Mac’s Convenience, near downtown Sydney, has been taking advantage of the rise in popularity of bitcoin and cryptocurrencies, and is the only business on the island to let customers purchase the online currency with real cash in person.

A variety of new businesses have come out of the woodwork to capitalize on the massive popularity of cryptocurrencies. One company, LocalCoin, has been expanding into Atlantic Canada. Last year, it scouted possible locations in Cape Breton. It was very interested in Mac’s Convenience, which is adjacent to Wentworth Park.

“They certainly did hone in on the fact that they really liked our location,” said Leanne Boutilier, co-owner of the Mac’s. “We were very centrally based. We’re on the cusp of downtown Sydney.”

LocalCoin has already invested heavily in expanding within Canada. Its website says it is “Canada’s largest bitcoin ATM network,” with more than 500 terminals across the country.

Bitcoin is the oldest and most successful form of digital currency called cryptocurrency. In the last few months, it has surged in popularity and price. It is currently hovering at a value of over $70,000 for 1 bitcoin — a lot more than the value $15,000 a year ago. 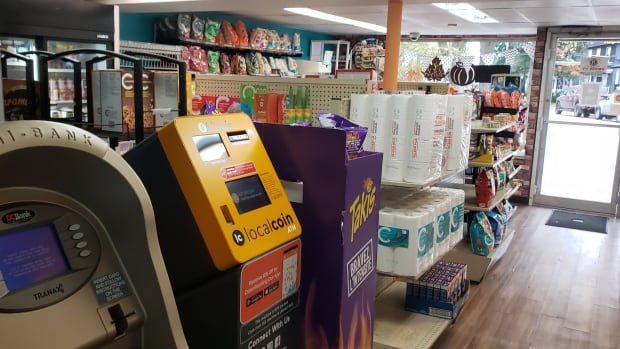 Down the aisle, past the pet food is Cape Breton's first bitcoin ATM | CBC News

A convenience store in Sydney, N.S., is the first business on Cape Breton Island to allow customers to purchase cryptocurrency with cash in person.