Protests against El Salvador’s President Nayib Bukele saw thousands gather in the streets of its capital on Wednesday.

Opponents of the 40-year-old populist, who was elected in 2019, say he has concentrated too much power and weakened the independence of the country’s judiciary.

“The time has come to defend democracy,” said one of the protesters, former Supreme Court justice Sidney Blanco. “This march is symbolic, it represents weariness with so many violations of the Constitution”.

Bitcoin battered and bruised as El Salvador officially adopts the crypto as a legal currency
Marchers in San Salvador also protested Bukele’s controversial decision to make Bitcoin an official currency in El Salvador. The government launched “Chivo,” a national digital wallet for the token on September 7, but the rollout has been marred by system bugs and frequent periods offline.

A demonstrator vandalizes a Chivo Wallet Bitcoin ATM during a protest against President Nayib Bukele’s policies on Independence Day in San Salvador, on September 15, 2021.Marvin Recinos/AFP
During Wednesday’s demonstrations, some protesters attacked new Chivo cash machines set up to handle Bitcoin transactions, with at least one machine set on fire.

“They say the ‘vandalism’ was the work of ‘infiltrators’, but there has been vandalism in ALL their demonstrations,” he wrote on Twitter.

The machines had been inoperable for most of the week since they were installed, AP reported, due to crashes in the Chivo system that appeared to be overloaded by the number of Salvadorans looking to take advantage of a $30 (€25) bonus put in each account to incentivise adoption.

Bitcoin sceptics
There has been concern about the Salvadoran government’s enthusiastic adoption of Bitcoin as legal tender along with the US dollar ever since Bukele announced it in a video recorded in English and played at a Bitcoin conference in Miami in June.

Bitcoin is frequently subject to wild swings in value, limiting the token’s functionality as an official currency. The cryptocurrency’s price fell by 11.1 per cent on September 7, the day El Salvador adopted it as legal tender.

In August, protesters at a demonstration against Bitcoin’s adoption held up signs saying “Bukele we don’t want bitcoin” and “No to corrupt money laundering”.

“We know this coin fluctuates drastically. Its value changes from one second to another and we will have no control over it,” Stanley Quinteros, a member of the Supreme Court of Justice’s workers union, told Reuters.

The country’s Bitcoin Law, passed by a large majority of El Salvador’s congress in June, requires all businesses that are technologically able to accept the token as payment. Private citizens have no obligation to hold or use it.

Bukele’s New Ideas party won a congressional majority this year and immediately after taking its seats in the National Assembly in May, it replaced the five members of the Constitutional Chamber and the independent attorney general who had balked at several of Bukele’s earlier actions.

Soon after, the Constitutional Chamber tossed aside what had long been interpreted as a constitutional ban on consecutive presidential reelection, setting the stage for Bukele to potentially seek a second term in 2024. Bukele has not so far announced plans to seek reelection, but critics assume he will. 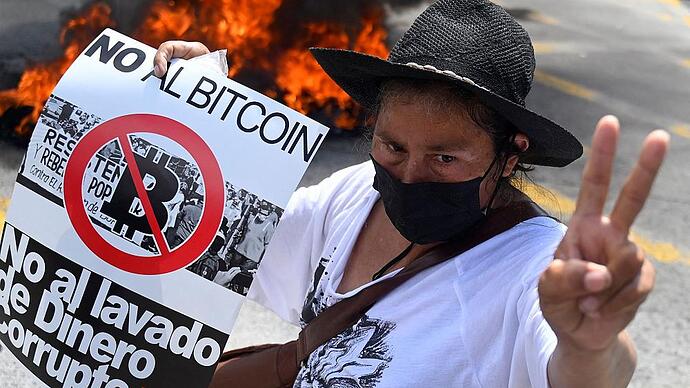