Bitcoin of America, a popular virtual currency exchange, has announced its partnership with Jambos. Jambos is a non-profit organization that helps bring comfort to thousands of children in the foster care system. Even though Jambos and Bitcoin of America differ in their services, it is their passion for working together for a greater cause that unites them.

About Bitcoin of America:

Bitcoin of America is a digital currency exchange, registered as a money services business with the United States Department of Treasury. Apart from ensuring a fast and hassle-free transaction, their customer support makes them the best in the industry. Their mission is to provide their customers with a fast and easy transaction process, while ensuring the best rate in the market. To date, Bitcoin of America has over 900 Bitcoin ATM locations. They are located in major cities across the USA.

Jambos is an amazing nonprofit organization that helps bring comfort to children as they journey through the foster care system. Their hope is that every child in the foster care system experiences comfort and peace. Jambos has recognized that often times children enter foster care with few of their own belongings, which is why they find it so important that the children they serve find comfort in receiving brand new pajamas.

Rebekah Black, Founder & CEO of Jambos adds, “At Jambos we are ecstatic about the impact we will be able to make thanks to Bitcoin of America! Our organization is now able to take on more territory and serve thousands more children in foster care because of their generosity and their belief in our mission!”

When Bitcoin of America heard about the opportunity to bring comfort to kids in a community, they already had such a big ATM presence in, they felt they had to get involved. Jambos plans to expand their territory to Chicago and all of Georgia with the help of Bitcoin of America. They even plan to develop a new program called Jambos Teen. 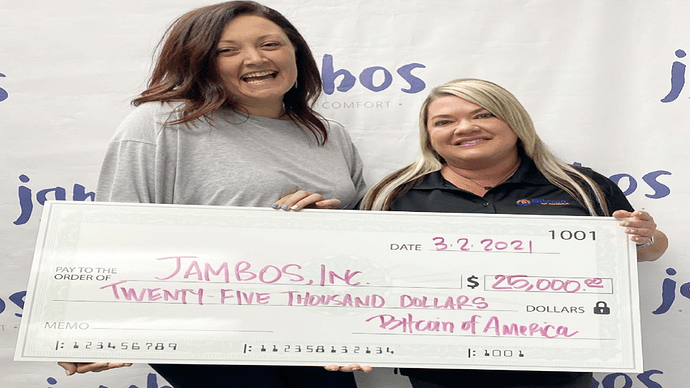 PRESS RELEASE. Bitcoin of America, a popular virtual currency exchange, has announced its partnership with Jambos. Jambos is a non-profit organization