It’s not always easy when it comes to buying and selling cryptocurrency, especially for newbies. But, a relatively new innovation does make it easy for anyone who has a crypto wallet. Cryptocurrency ATMs are popping up all over the United States, making it fast and easy to buy, selling and trade crypto on the go.

In 2013, the first cryptocurrency machine was installed at the Waves coffee shop in Vancouver, Canada. A few months later, Europe saw its first Crypto ATM in Bratislava, Slovakia. The first such machine in the United States popped up in a cigar shop in Albuquerque, New Mexico in 2014; the first American machine was short-lived, only standing for a month. However, now, there are at least 38,000 Cryptocurrency ATMs all over the United States.

The US Bank Secrecy Act requires that crypto ATM companies have an effective written anti-money laundering program in place. Bitcoin ATM companies also must register as a money service business, which is regulated by the Financial Crimes Enforcement Network. Other countries have similar requirements.

Bidirectional crypto ATMs allow you to cash out, by putting dollars into your bank account.

Also, there is a fee when using these machines; fees can range anywhere from 7% to 25%, so be aware of that before using one.

Some machines also allow you to send cash to your friends and relatives overseas by using two crypto ATMs. The machines do not need to be operated by the same company. Of course, both parties will need a cryptocurrency wallet, and the person on the receiving end will need to be at a bidirectional machine. However, there are workarounds in which the recipient does not need a crypto wallet.

Bitcoin and More
Most cryptocurrency ATMs in the United States deal with all major cryptocurrencies, not just Bitcoin. The most common ones are Bitcoin, Etherium, Litecoin, Dogecoin, and Tether. However, you can find machines that also deal in Dash, Zcash, Monero, Ripple, and others.

These ATMs are often found at gas stations and shopping malls, as well as in grocery stores, casinos, and other high-traffic locations. Operators rent the space from business owners to place their machines.

You Can Buy a Cryptocurrency ATM to Start Your Own Business
There are dozens of crypto ATM manufacturers, and you can also buy used ATMs or one at an existing location. A new Bitcoin ATM can range in price from around $3,000 up to $15,000.

However, the price of the machine is not the only expense. You’ll also need to get it licensed and pay rent to a business to place your machine. Generally, to get up and running can take between $10,000 to $15,000. Also, keep in mind the machine will need to be serviced, and there is a monthly space rental fee.

Location is key. You’ll need a place that has a lot of foot traffic, preferably open 24 hours a day. However, restaurants have proven to be excellent spots. Finally, you’ll need to be in a place where a lot of people buy and sell cryptocurrencies.

While you might think a small town in the middle of nowhere is a bad spot for a Bitcoin ATM, think again. If it is on a major travel route, it could be used by people just passing through, on their way to somewhere else. Towns on popular interstate routes from places like Los Angeles, San Francisco, and New York City are possibilities.

Once up and running in a decent location, most operators average $30,000 per month per machine. However, some machines generate as much as $100,000 per month.

As with any business, operating a crypto ATM isn’t without risks. However, it can be a very lucrative business that practically runs itself.

Bitcoin ATMs are the Wave of the Future
Just as “automatic tellers” were something new back in the 1970s, the same can be said of cryptocurrency ATMs. As various cryptocurrencies become mainstream, so will the ATMs.

Whether you are looking for a nearby Bitcoin ATM for a transaction, or have an interest in operating the machines, the future is here. With 38,000 ATMs dotting the United States already, this is just the beginning of the next revolution in currencies. 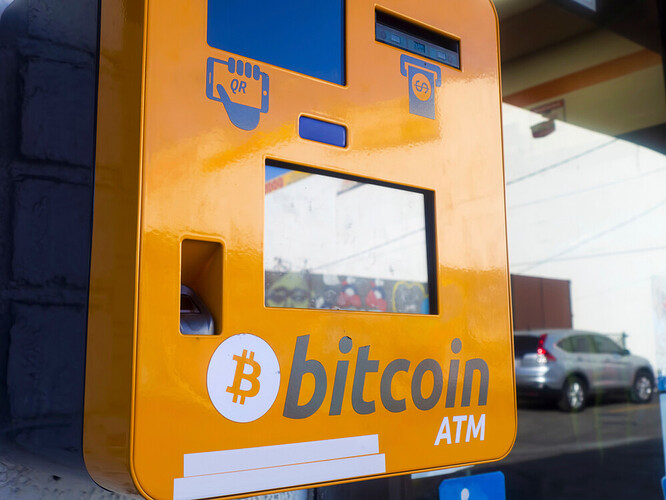 Some machines also allow you to send cash to your friends and relatives overseas by using two crypto ATMs.